skip to main | skip to sidebar

Nothing beats a bowl of warm Niu Rou Mien

Back in Seoul, my favourite Chinese restaurant was DTF(short for Din Tai Fung). Like always I would order the Niu Rou Mien, which is Taiwanese Braised beef noodles. It's wheat noodles in a thick beef soysauce broth, with chunks of tender and juicy beef. I'm not sure how long the beef had been cooked but the meat was soft enough to be pull apart easy from my teeth with just a pair of chopsticks.

In Lyon, the closest Chinese food we can get is Vietnamese food. You see, all the Chinese restaurants are usually opened by Vietnamese. The typical names you would see on the menu are Nems (spring rolls with lettuce and mint, dipped in fish sauce), Riz Cantonais(fried rice), Aigre-Douce (Sweet and sour), Poulet à l'ananas (pineapple chicken) or Canard Laqué (Peking duck swimming in sauce). It's like in the States where you see General Tsao Chicken or Beef & Broccoli everywhere.

It was hilarious when I first arrived in France. My french family was so stunned when I told them Nem is not Chinese.
"But they have them in every single Chinese restaurant." That doesn't make it Chinese. For the french, it's the must-have appetiser.

Don't get me wrong. I love Vietnamese food when it comes down to Pho, Bobun and even the nems. I just miss real Chinese and Singaporean food sometimes. And I made Niu Rou Mien for dinner today! Alsolutely delicious with fresh noodles- in this case I got fresh tagliatelle from a low-end supermarket called Leader Price. Oh yeah, blame it on the crisis. 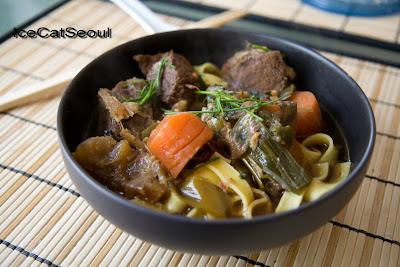 Add beef to the pot and stir to coat with the spices. Continue to stir until the beef gets brown.

Add all veggies and all seasoning for the sauce. Fill the pot with enough water to cover the beef and veggies.

Bring it to a boil and simmer covered for 2 hours. While simmering, more water can be added if the stew gets too dried.

Top the stew over a bowl of fresh tagliatelle or any kind of Chinese noodles. Garnish with chopped cilantro and spring onions.

Posted by IceCatSeoul at 12:36 AM 0 comments

Current Location: Singapore, home.
I hadn't been updating the blog for a year due to my busy schedule. My current focus is baking. I simply love it and spend most of my free time baking bread or assembling cakes.

Lyon (2008-2010): I love Lyon! The gastronomy capital of France. Food markets everywhere in the morning. Lots of ethnic grocery stores: Indian, Chinese, Vietnamese, African, Arab,Japanese and even Korean. Best of all I can find my frozen Roti Prata* (Spring Home) from Singapore! What a gem. (*Indian crispy crepe)

Southern France near Montpellier (2007-2008): I still have a kitchen. Living in a small town means lots of cooking at home. The locals seldom frequent restaurants. I don't think well of processed food with all those hidden preservatives and chemicals added to it as well as other ingredients beyond my understanding(E621, e627, e631, ES51?). Other than occasional premade cans and frozen packages from the supermarket, I prepare most of the meals.

Seoul (2006-2007): "An explorer, whose interest is discovering new cuisine: French, Mediterranean, Chinese, Singaporean, Middle-eastern and Ethiopian." "A Singaporean expat living in Seoul." "I get very homesick in very often. I find pleasure in preparing a meal from scratch with fresh ingredients. Given that foreign food and ingredients are scarce in Seoul, we will have to make do with whatever ingredients I can lay my hands on. I remain hopeful of finding them soon. South Korea is developing so quickly day by day. New imports are arriving on the shelves of supermarkets."

Shopping in Seoul for Expats

This work is licensed under a Creative Commons Attribution-Noncommercial-No Derivative Works 3.0 License.